The Friends subscriptions of Ł5 per person are now due for the year 2021 - 2022. Please preferably make a standing order to 20-65-18 a/c 93057402 to Friends of Raleigh Park with reference your name or send a cheque to the Membership Secretary at 20 Raleigh Park Road Oxford OX2 9AZ or contact Stephen Parkinson (Chairman) 01865 724525 or David Brown (Secretary) [email protected]

If you are interested in taking an active role in the Friends, please come forward. The Chair and Secretary will be happy to discuss what is involved.

We comply with the General Data Protection Regulation. The data we hold is your email address and subscription; this data has not and will never be shared with anyone.

Dates for your calendar:

Tasks will include: Scything and raking horsetail in the areas of fen undergoing restoration Pulling Himalyan Balsalm in the tongue fen. This is an invasive non-native species and despite being good for pollinators, sets huge amounts of (explosive!) seeds and very rapidly forms a dense monoculture with no space for the native fenland plants. We need to prevent it spreading and eventually remove it completely.

There a few other tasks including: digging out some of the areas of Pendulous Sedge which have spread aggressively into restoration areas. scything a few areas of Hard Rush which we missed last time. The hard rush is coming back with a vengeance and we'll need a work party in May to top it before the target fen plant species start growing vigorously.

Path construction In August and September we have asked Oxford Conservation Volunteers if they can help us install a new wooden boardwalk/stone filled steps on the path down to the pond from the Raleigh Park Road side. Due to the groundwater seepages on the slope here, this area gets very wet and almost impassable, leading to damage to the peat and the fen either side. Constructing an all-weather path floating on the peat will protect the fen and also improve the experience for park users. Oxford City Council & ODS have kindly agreed to pay for the materials.

Tasks are led by Adam Bows and are covered by BBOWT insurance as usual. Children under 18 must be accompanied by an adult.

Please bring stout boots or wellies and gloves if you have them and bring a drink and some snacks waterproof/sunhat and old clothes. You might need sunscreen if it is very sunny. Tools and gloves can be provided.

The objectives of the Friends of Raleigh Park are to protect, conserve and enhance the Park, which is a Local Wildlife Site, for the benefit of the community.

The planning application to develop land owned by the Warburg family on Yarnells Hill, which adjoins the Raleigh Park fen and the newly revealed Long South Western Tongue is currently on hold after objections by the Oxfordshire Badger Group.

The Chairman , the ecologist Judy Webb and the City among many others have responded in full to this planning application for the building of houses next to and in the catchment area of Raleigh Park in a position below the level of the main sewer. The Planning Application is number P20/V2298/FUL, and can be viewed and responded to through the Vale Planning Web portal The position of the proposed development can be seen on the Google Earth flyover of Raleigh Park.

Adam Bows is certificated and insured for chainsaw use.

The Annual General Meeting of THE FRIENDS OF RALEIGH PARK was held on Thursday 11 November 2021.

The Chairman presented his Chairman's report and the accounts

Andy Gunn (BBOWT) reported on Wild Oxford. No volunteer sessions could take place due to the Covid-19 epedemic and the resulting financial constraints. However Community Group Team Wilder was launched by BBOWT to provide training for leadership roles in work parties for volunteers.

Wild flower seed collected by Judy Webb has been sown.

Adam Bows reported that a work party was planned with volunteers to rake hard rush previously cut by the Parks Dept. Creeping thistle and bullrushes need also to be pulled out. He gave a presentation on the fungi in the Park and reported that works to rewet the fen downstream of the pond have been successful and his study of the outcomes of the Wild Oxford initiative shows the benefit to the wildflowers and wildlife. Julian Cooper wrote to suggest the Parks Dept would trial cattle neck vibrators to keep them away from sensitive areas such as orchids in flower.

Clive Smith gave a nest box report. Of the 14 boxes initially erected three had blue tit and 5 great tit nests. The nests were bagged for Linda Losito to examine for invertebrates. She found fleas and body parts of weevils and click beetles. One weevil, Grypus equiseti, is a specialist on horsetail plants. One bag contained 7 live sap beetles, Soronia grisea, which must have been trying to hibernate.

The bird feeder was well used.

Swifts find it difficult to find holes for their nests and Clive has also made nest boxes for placement under the eaves of people's houses to help them.

Barbara Witkowski presented the successful work of the Oxford Badger group in the Raleigh Park badger vaccination report . The video shows a badger after inoculation. She reported that there could be no badger cull of vaccinated badgers.

OCC are to draw up a management plan for the Park in collaboration with interested parties and will lead eight work parties next year. They replaced the wooden gates with metal ones and will resite the dog poo bin which partially blocks the Raleigh Park Road entrance.

The Friends contributed to a bench erected in memory of Sue Cassettari who had given a presentation to the Friends with Jenny Miller (Forest School Leaders, North Hinksey Primary School) on Forest School Learning.

Natural England have granted the badger vaccination licence for Raleigh park to the Oxfordshire Badger Group (OBG) who have successfully completed the task.

OBG is taking part in a 'badger found dead' study with the Animal and Plant Agency. They will be collecting dead badgers, mainly from the roadside. If you see any dead badgers please email the location to [email protected]

Cattle in the Park

Cattle are currently in the field above Raleigh Park and will be brought into the park in a week or so. They will graze the Park all summer. They reduce the rank grass and nettles and encourage the development of wild flowers. If left uncut the brambly thorny growth and trees will increase and the park will become entirely scrubby woodland.

When cattle are present give them a wide berth. Cattle have an instinctive fear of wolves and may be agressive to dogs so it is advisable to keep dogs well under control and preferably out of sight of the cattle particularly towards dusk as they become frisky before bedding down for the night. If there are any issues please contact the Parks Dept [email protected] or the Friends of Raleigh Park [email protected] For any urgent enquiries please contact the Parks duty officer 07768238906

Be aware of health and safety if pond-dipping; we are expecting to install a platform in due course.

Buzzards, red kites, roe deer, muntjac deer and foxes are frequent visitors while badgers, moles, song birds, rabbits and other rodents and bats are resident. Song birds like to visit the bird feeder; watch the feeding birds scatter as a sparrowhawk arrives:

Disease resistant elm trees have been planted with help from Butterfly Conservation. 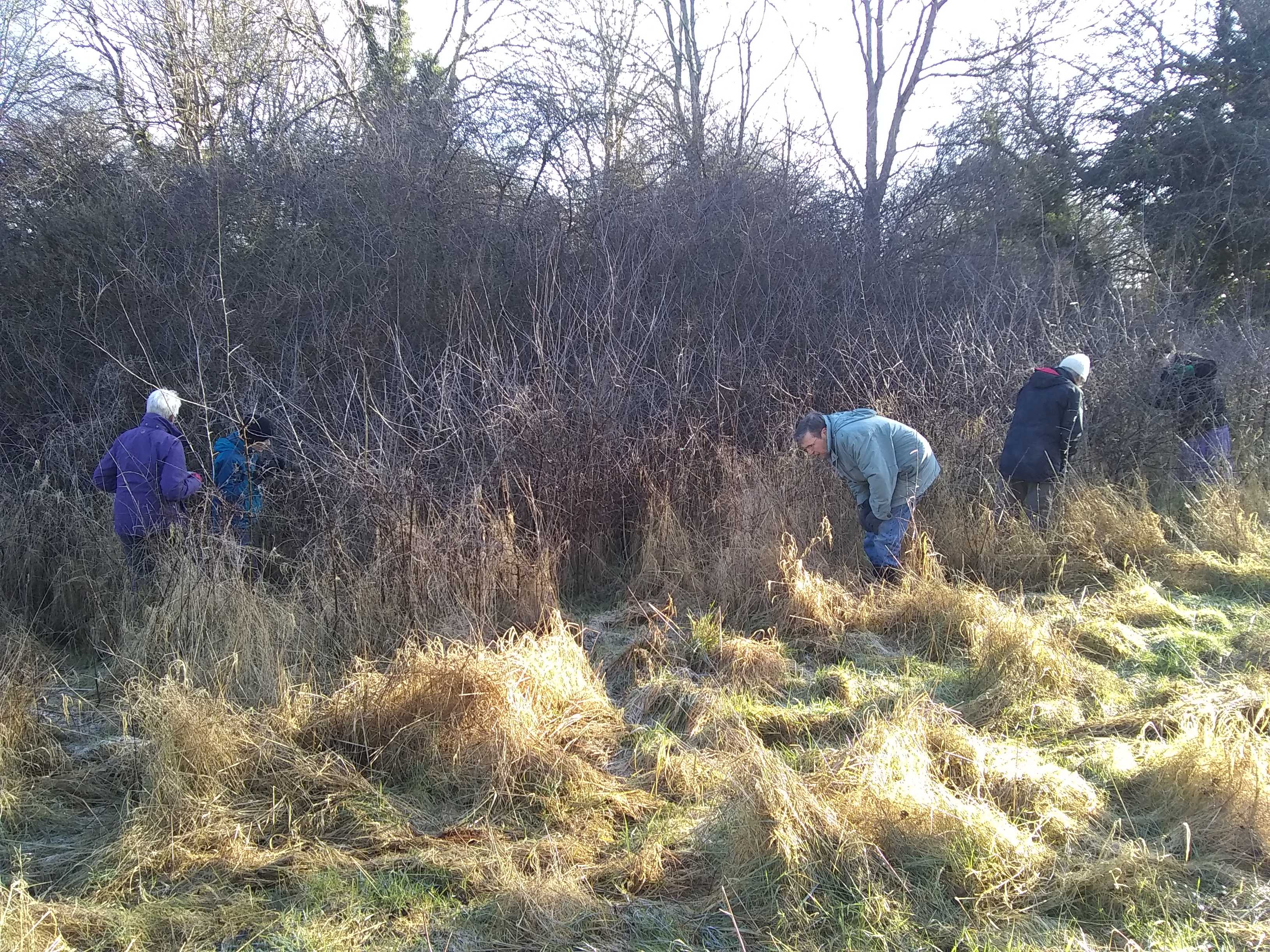 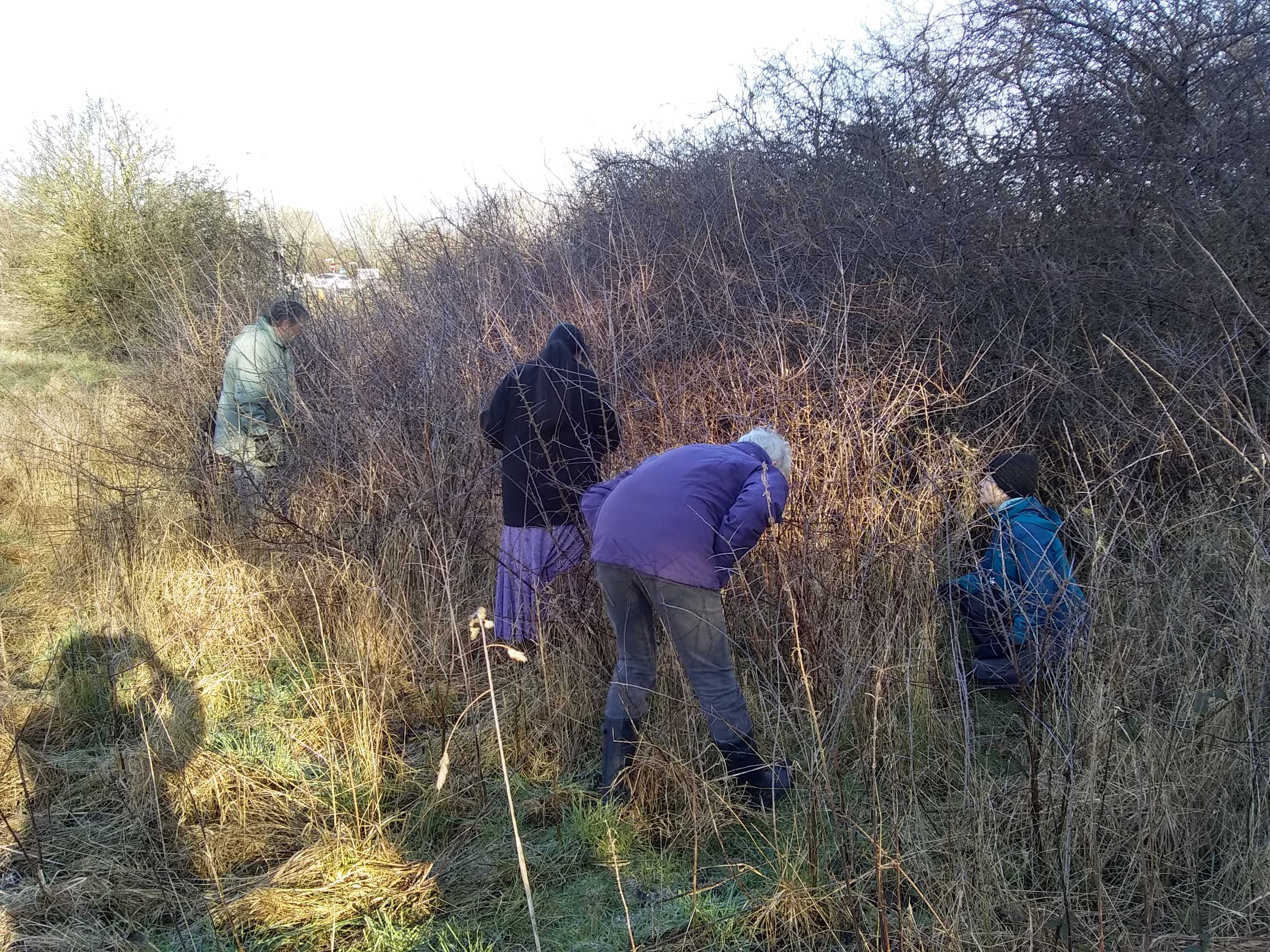 Egg hunting Jan 2020
You may have noticed some tags attached to blackthorn branches, these mark the eggs of the brown hairsreak butterfly located by volunteers lead by Steve Wooliams of Butterfly Conservation. The brown hairstreak has undergone a substantial decline due to hedgerow removal and annual flailing, which removes eggs.

Butterfly surveys normally start in the spring when the butterflies start emerging from their chrysalises, currently lots of striking orange-tips are about. We hope to resume our leisurely walk when the virus emergency permits noting the butterfly species we encounter.

Oxford City Councils Countryside Team are working in partnership with the Friends of Raleigh Park and BBOWT to carry out works to improve the habitat and open up the views of the City from areas of the Park. We have received a Letter of Commendation from the Oxford Preservation Trust in recognition of these works which are the subject of an ongoing scientific study.

Judy Webb has completed excellent reports with a list of recommendations for future workparties in the Park.

Willows overgrowing the pond have been thinned, vegetation overgrowing the stream removed, a waterfall rebuilt and removal of Himalayan Balsam and Greater Reed Mace from boggy areas, parrot's feather from the pond and new bramble growth on the fen areas by the stream is ongoing. Yellow Rattle wild flower seeds have been collected and sown in late autumn to weaken the coarse grasses.

There is what is believed to be the remains of the Roman road towards the ford which gives Oxford its name from the direction of Besselsleigh running parallel to the current road up Harcourt Hill. The outline of the raised metalled section with a ditch each side is clearly evident under the turf in winter or when the grass has been cut.

There is a small oblelisk near the pond. The sun is shining revealing the date 1753 in the picture (click on the picture to enlarge it) and placing plasticine in the depressions reveals more of the inscription, probably "the Conduit". Conduit House (marked Well House) had been constructed over a spring to supply Oxford with water in 1615-17 and is within a kilometer of the obelisk (marked Stones on the OS map). The obelisk presumably marked the location of a chamber holding water for an extension to a channel or vaulted gully diverting a spring to Conduit House.

A cutting and embankment constructed to smooth the slope of a track linking Harcourt Hill to the track between North Hinksey and Yarnells Hill is shown on the map of the land handed over to the City of Oxford in 1926 and its construction has covered this channel on the obelisk side or the embankment.

A curved depression leading towards Conduit House visible on the other side of the embankment from the obelisk supports this interpretation of the writing on the obelisk.